Posted on December 3, 2010 by storefrontsseattle

Storefronts Seattle opened Round 2 to much success last night!  The evening kicked off with a celebration for Storefronts artists, where City Councilmember Sally Clark praised the positive impact the program has had on South Downtown Seattle. The Storefronts were active and hopping–some highlights of the night: 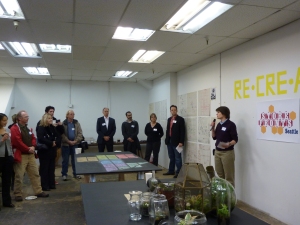 Come visit the Storefronts yourself!  They’ll be up through February 28, 2011.

Activating neighborhoods and overlooked spaces by filling vacant urban spaces with art installations, pop-up boutiques, galleries, and community groups since 2010.
View all posts by storefrontsseattle →
This entry was posted in Uncategorized. Bookmark the permalink.